In martial arts, I practice something called “kata,” a pre-arranged set of movements that depict a person defending and attacking an opponent. It is necessary to advance a person’s status in many martial arts that include Shotokan Karate, which I am a blackbelt.

Aside from that, each day, I practice something similar called Tai Chi Chuan. This “kata” or form has about a hundred or so steps that I practice slowly but consciously in attempt to perform each movement perfectly and experiencing new wisdom not felt before.

As I attempt perfection or to continuously improve myself in the smallest of ways, I feel a small part of me gaining where I had not gained before.

In the field of continuous Improvement, I, personally, strive to learn and improve but do so by picking up new books, videos, attending seminars, and meeting new people. 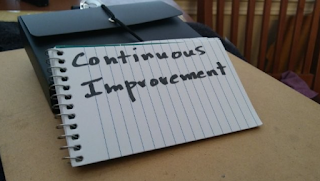 To some, there is no such thing. Regardless, it is my opinion that we, as human beings, the highest form of life on this planet, should do everything, in our power, to search, strive and achieve it.
Such is the case for those of us who seek Continuous Improvement, and to contribute and develop what we can to make our world a better place for present and future generations.

Recently I watched a video highlighting Usami Riki World kata champion. She performed perhaps the most difficult kata ever called Chatanyara Kushanku. What made it even more challenging was that she executed it with rows of dominos beneath her feet. Not only did she perform it flawlessly, she did so without knocking one domino or creating the chain of events sending them all  flat on the floor.