Won 9-8 against A. Cardenas.   He looked tired. Last year, A. Cardenas pinned Ashton in the last second.  They were evenly matched.

Ashton's semi-final match.  Pinned L. Holman.
Finals.  Pinned B. Holman to win the 109 13 and under division!!!  Congratulations Ashton!
A winner!!! 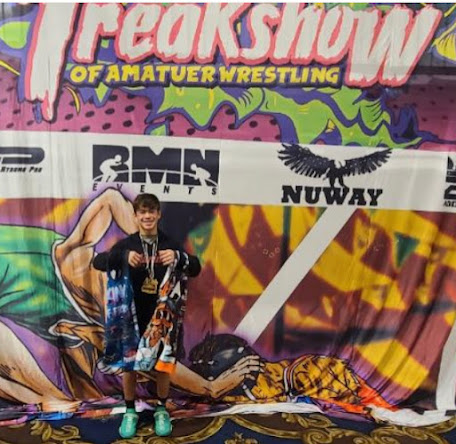 A young student entered a small garden.  It was his sensei’s back yard, and it was there where he was to learn his new lesson.

For six months, he was pushed toward exhaustion repeating technique after technique. Any deviation was welcomed.

As he entered, the Japanese style garden took his breath away, well manicured, healthy full of color and life, the fragrance sweet with a burst of fresh energy.  He thought what it would take to create and maintain such beauty.

“Yaguchi!” the voice came from a small tool shed.  It was sensei Tanaka.

The young student hurried to the shack and discovered his sensei with his arm buried into a tub of water.

“Please come here and see what I am doing.”

The boy stepped closer to find that his instructor was holding down what appeared to be a round ball.

The sensei pulled his hand out and it was then that Yaguchi saw that the round ball was in fact a basketball as it bobbed up to the surface.

“Petroleum jelly is rubbed on it.  Now, you try.”

“I want you to push the ball down.  Yes, to the bottom of the tub, and don’t let it float up.”

“Is there a special technique I should be aware of?”

Yaguchi knew.  It was a test.

He had to succeed this small and simple task to advance to the next level and learn new martial arts techniques, possibly a weapons form.  The thought excited him.  He touched the ball that was indeed slippery but not unreasonable, vowed nothing could stop him.

However, attempt after attempt, each resulted to failure and frustration.  The air in the ball and petroleum jelly made it impossible.  “Sensei,” Yaguchi said.

“Let me help you,” sensei Tanaka said as he helped steady the ball underneath the water.  “Now hold it firmly in the center and do not allow it to move.”

Yaguchi complied and, though difficult, he was able.

“What did you learn?” the master asked.

“I learned that basketballs aren’t made to be in water.”

The venerable master stifled a laugh.

“Yaguchi-san," he said, “Which was easier.  From the surface? Or when it was held steady in the water?”

“Steady in the water.”

“And that is your lesson,” the aged sensei said before walking back into the beautiful garden.

"Good," the master smiled, "I think this is a nice place for us to continue our training.  What do you think, master-in-training?"